Choose a protected page to view its resources. If you do not know the necessary passwords, please contact marketing@lplatfrg.com.

Financial Resources Group Investment Services supports women in leadership who have gone above and beyond to achieve for the benefit of our firm as well as the financial services industry. Over the coming months, we will be featuring a series of articles spotlighting women leaders at our firm and beyond.

Career Beginnings in the Big Apple

Growing up in Long Island, NY, Laura recognized her passion for finance when she was a teen. “I had given thought to the idea of becoming an accountant during high school and knew I wanted to be a CPA my freshman year in college,” said Laura.

Heading into a career path in an industry that has historically been concentrated with males, Laura was not fazed. “I never thought of the industry as male dominated,” said Laura. “When I decide to do something, I don’t really think about the obstacles.”

After graduating from the University of Albany – SUNY, her career began at a small CPA firm in midtown Manhattan. Her nights were spent studying to be a CPA she and passed her exam while working for the firm.

She landed her next job at Accenture (formerly Anderson Consulting) where she switched gears from public to corporate accounting. Laura looks back at that time fondly. “This was a really fun job where I met a lot of very fun, super bright people,” she said. “Our motto was work hard, play hard and that is what we did!”

Working in the Tropics

While working for Accenture, Laura received a very enticing offer that landed her a two-year contract with a one of the largest professional services networks in the world.

“I left Accenture prematurely due to another opportunity that I simply could not refuse,” she said. “I was hired to work for Ernst and Young in the Cayman Islands and was immediately thrown right back into the world of audit where we audited banks, insurance companies and hedge funds. I was quickly reminded of why I left public accounting to begin with; however, I couldn’t beat the location.”

After her contract ended with Ernst and Young, Laura headed back to NYC where she worked for Segal Consulting for 13 years. Laura and her husband Dave were beginning to feel the effects of juggling the hustle and bustle of working in NYC coupled with raising their then three- and five-year-old children.

“We were looking for a quality-of-life change,” said Laura. “We’ve been using full-time daycare since the kids were born and I was commuting in and out of the city on a daily basis. Things were not getting easier with kindergarten starting for our oldest.”

Laura and Dave both have friends from college that live in the Charlotte area and they visited them on occasion and developed a love for the area. “We looked at moving to Charlotte when Dave got his North Carolina teaching license and I had a job opportunity I was considering,” she said. “Then we got cold feet and pulled back.  We went through another winter and then I started looking again for jobs trying to re-ignite the idea.”

After coming across an accounting position posted on LinkedIn by Financial Resources Group CEO Bruce Miller, Laura was intrigued and decided to apply. “Bruce and I started with a phone interview that went well,” said Laura.

A month later, she met Bruce and Lou Mastropietro in Long Island for an in-person interview. “While interviewing with Bruce in my hometown, I felt the interview morphed into more of a conversation, which seemed like one with an old friend and we immediately had great rapport,” she said.  “I was later offered the position and the new life for our family had begun.”

Not long after joining Financial Resource Group in June 2015, her position quickly evolved into a leadership role. “Two months after I was hired, we were granted our FINRA membership,” said Laura. “I began working closely with Christa Franse to move operations into the broker-dealer. We were juggling a lot and growing. I was studying for the FiNOP exam and things were moving quickly. I started working on enhanced internal reporting so we could measure different growth metrics and manage profitability.”

Working as the company’s Controller and FiNOP, Laura brought to the table extensive knowledge gained from her previous work experience. “In my career, I have learned a lot about detailed and accurate internal and external reporting, as well as a knowledge, respect, and value of internal controls,” she said. “Additionally, knowing how to balance two very important aspects of business which are understanding the impact certain decisions hold for the company and understanding employees’ needs.”

Since joining, Laura has grown the accounting department and now manages a team of three. “To this day, my team continues to add internal reporting to help the company navigate through different goals and desired financial paths,” said Laura.

In 2020, Financial Resources Group merged with Gladstone Wealth Group forming the largest enterprise by revenue and assets on the LPL Financial corporate RIA. Laura looks back on her role in this merger as her greatest personal success story of her career.

“I traveled up to New Jersey by myself to meet with Robert Hudson and Keith Brothers of Gladstone,” said Laura. “We found common ground and similarities in our discussions and developed a mutual trust and affinity.”

After her initial meeting, Laura, Mark, and Bruce traveled back up to New Jersey and started negotiating a merger. Laura’s greatest success was being an early part of the merger and furthering the relationship between the two firms. “The Gladstone merger has been a success for the company and I am very fortunate to have been a part of it,” said Laura.

Keady Gets Her Kicks

It should be no surprise to anyone that Laura recently attended the inaugural game for Charlotte’s MLS team, the Charlotte FC. Charlotte FC played at Bank of America Stadium for the first time in franchise history, playing against the LA Galaxy on March 5th with an MLS record-breaking crowd of 74,479.

“It was electric and I felt like I was at the World Series. The crowd was so much fun,” she said. “There were technical difficulties when the National Anthem was sung where the microphone went out and the crowd all got together to finish singing. It was just awesome.”

From the Great Outdoors to Baking

Laura is the proud mother of her now 13-year old son Nolan and 10-year old daughter Shayla she shares with Dave and is active with her family during her free time. “I love spending time outdoors with my family and our dog Mello,” she said. “I love hiking, kayaking, traveling and simply soaking up the sun.”

Additionally, Laura loves reading and is quite the baker. Laura was recently gifted a cupcake cookbook with over 150 different cupcake recipes and plans to bake each and every one of them.

A Nod to Influential Women

Laura’s three older sisters been an inspiration to her throughout her career. “I’ve leaned on my sisters in various aspects of my professional growth and value their input as they have each led successful careers,” said Laura.

However, her sisters are not the only women that have made a lasting impact on Laura. “Tina Fey has been influential to me being the first female head writer of Saturday Night Live,” she said. “I also love to read Jane Austen’s books. Jane was a female writer in the early 1800s who wrote her books anonymously during a time where society wasn’t fully accepting of female writers.”

For women considering a career in the finance industry, Laura has this to say, “I believe that knowledge, hard work, dedication, and experience will help you succeed in this industry as well as any other,” she said. “Pass as many FINRA exams as possible and go for it. The world is at your fingertips.”

Laura adds, “This goes back to my decision to enter this career path. I never really noticed it being a male-dominated industry at that time. I started to notice it more as time went on, but I didn’t let it limit me. That’s how I think any woman should attack their career.”

Laura reflects back on her career accomplishments that has led her to where she is today and very much looks forward to what the future holds. “It’s been quite the journey,” said Laura. “I’m so grateful to be part of Financial Resources Group.” 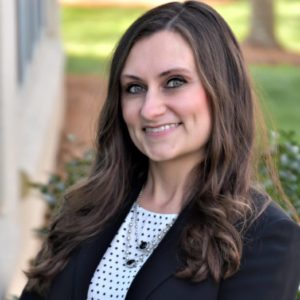 "I believe that knowledge, hard work, dedication, and experience will help you succeed in this industry as well as any other."

Actionable Methods for Knowing Your Customers

Customers are the heart of any business. They are also the lifeline to each of our businesses’ success. Keeping them top-of-mind should be a top priority as well as taking

Financial Resources Group Investment Services continued to celebrate the holidays on Monday, December 19th with some holiday festivities. Everyone wore “ugly holiday sweaters” while they enjoyed lunch and a hot

Financial Resources Group Investment Services celebrated the holidays on December 3rd. The event was held at the Charlotte City Club on the 31st floor which overlooked the beautiful uptown Charlotte